Know your breeder, it's very important.

Striving for the healthiest and absolutely gorgeous Bengals. A Bengals is a very happy and loving addition to any family.

The Bengal Cat is a stunningly marked domestic spotted cat exhibiting the personality and temperament  desired for family companionship while bringing the look and feel of the jungle into your home. 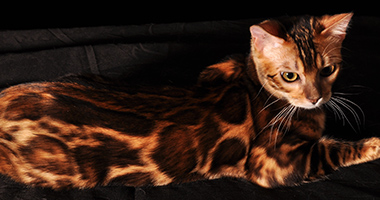 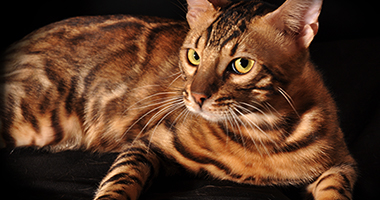 One of a kind king! 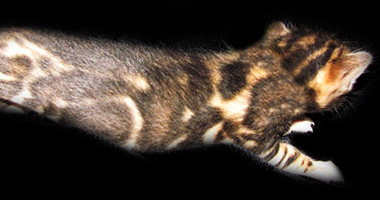 The Bengal is a hybrid breed of domestic cat. Bengals result from crossing a domestic feline with an Asian leopard cat (ALC), Prionailurus bengalensis bengalensis.

The Bengal cat has a desirable "wild" appearance with large spots, rosettes, and a light/white belly, and a body structure reminiscent of the ALC. The Bengal possesses a gentle domestic cat temperament, if separated by at least four generations from the original crossing between a domestic feline and an ALC.

The name "Bengal cat" was derived from the taxonomic name of the Asian leopard cat (P. b. bengalensis), and not from the more distantly related Bengal tiger.

Bengal cats have "wild-looking" markings, such as large spots, rosettes, and a light/white belly, and a body structure reminiscent of the leopard cat. A Bengal's rosetted spots occur only on the back and sides, with stripes elsewhere. The breed typically also features "mascara" (horizontal striping alongside the eyes), and foreleg striping.

The Bengal cat is usually either classed as brown-spotted or snow-spotted (although there are more colors, brown and snow are the only colors of Bengal that the Governing Council of the Cat Fancy (UK) recognize). Within brown Bengals, there are either marble or spotted markings. Included in the spotted variation is rosetted, which consists of a spot with a dark line surrounding it. Snow Bengals are also either marble or spotted, but are also divided into blue-eyed or any other colors eyes.

The International Cat Association recognizes several Bengal colors (brown, seal lynx point, mink, sepia, silver) and patterns (spotted and marbled) for competition. In the New Traits class, other colors may be shown, as well as longhairs.